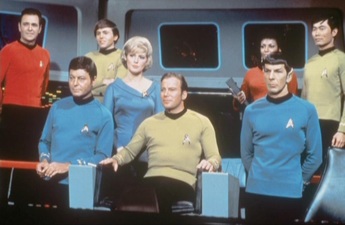 The historical and cultural significance of the original Star Trek probably go without saying. So, too, does the fact that the show is several decades removed from the majority of what we call Star Trek—in some ways, a product of its time; in other ways, light-years ahead. For my purposes right here and now, none of that is relevant. Looking at TOS strictly as three seasons of a saga that spans 30 seasons and 10 qualified feature films, I like the show...but I tend to like most of the other shows more.

There are some truly sensational episodes of TOS, and I'm impressed by how quickly the show found its footing—it typically takes any given Star Trek series two or three seasons to figure out exactly what it wants to be; TOS figures it out in about two or three episodes. What holds the show back, though, is how easily it falls into the same patterns. The crew regularly encounters omnipotent beings, evil doppelgangers, aliens pretending to be gods, civilizations that look suspiciously Earth-like, losses of self-control from some external force, reputable people who've gone crazy (e.g., every other captain in Starfleet), and unstoppable killing machines of all sorts. That might sound like a good mix, but when you've got about 80 episodes and you use each of these themes two or three times (or more), you end up retreading some amount of old ground every few episodes. The fact that it's almost always Kirk and Spock (and maybe McCoy) handling the situation makes the repetition that much more pronounced.

Granted, the triumvirate of id, ego, and superego that is Kirk, Spock, and sometimes McCoy is one of the most effective character dynamics in the franchise. Having grown up on TNG, however, I lament not having more episodes where Scotty, Sulu, Uhura, Chekov, Chapel, and Rand get to take center stage. I'm not opposed to a small main cast with a large supporting cast, but Star Trek in general works so well as an ensemble drama that it's hard sometimes not to wish for more variety here. The narrower focus impacts the pacing, too; compared with later Trek series, which favor dual plotlines that feature a variety of characters, TOS episodes tend to feel very long if you're not fully invested in watching the Big Three outwit this week's specific space monster.

I think my hangup here is that, despite all the time spent with the trio, there's not a lot of character development throughout the series, at least compared with what we get in the movies and the other Trek series. TOS has great characters, to be sure, but it's rare that we learn anything substantial about their backstories, and rarer still for anything to happen that impacts them in future episodes. That's why I celebrate episodes such as "Amok Time", "The Paradise Syndrome", and "All Our Yesterdays"—episodes where the characters are thrown into unusual situations that bring out a side of their personality we never have the opportunity to see.

I also confess that the three main characters don't resonate with me the way they do with diehard TOS fans. I identify most with Scotty—the optimistic problem-solver who's proud of the work he does behind the scenes. I relate to Chekov and Sulu, the upbeat guys who get along well with everyone but never fully mesh with the main group. I don't connect much with Uhura, but I respect her for that inner core of strength she possesses, that ability to command attention and respect by holding fast to who she is and using every aspect of her identity to her advantage. Of the Big Three, I feel closest to McCoy and his world-weary sense of how things should be—especially when he's tempered by the warmth and sass of Nurse Chapel—but he's got too fiery a temper for my taste. I like Kirk, but he's a man's man—he's got a softer, sentimental side I can relate to, but it doesn't really come out until the movies. I like Spock, and I love his witty banter with other characters, but my analytical side is more in line with what you see from Data or Tuvok, and my outsider tendencies are closer to those of Odo or Phlox. The Big Three are great characters; they're just not my characters. Thus, I rely more heavily on the storytelling to determine how much I like the show as a whole.

The first season is solid. Some of the most memorable antagonists in the series (and, for that matter, the whole franchise) make their first appearance: Harry Mudd, the Romulans, the Klingons, the Gorn, and Khan Noonian Singh. This season also contains two of my favorite episodes from any Trek: "A Taste of Armageddon" (a profound commentary on war) and "The City on the Edge of Forever" (a gut-wrenching and superbly written time-travel story). Really, many of the early episodes are classics in their own right, with memorable premises and interesting twists—and it helps that pretty much everything is a first for the franchise, so novelty is a big factor. Even the lowest points (let's go with "The Conscience of the King" and "The Alternative Factor") are merely dull or inane anomalies that are handily swept under the rug.

The second season is easily my favorite. Even though TOS hits the ground running, a lot of the first season is spent fine-tuning the direction of the show, and it's not until Pavel Chekov makes his first appearance that the character roster feels truly stable and complete. Moreover, the second season offers the best variety of episodes in the series: conflict comes from within ("Amok Time") and without ("The Changeling"); challenges range from galaxy-threatening ("The Doomsday Machine") to small, furry, and extremely inconvenient ("The Trouble With Tribbles"); problems are solved with diplomacy, ingenuity, and brute force; and the action takes place aboard starships and space stations and on a variety of different worlds. Granted, there are plenty of episodes I'm not so fond of ("Catspaw" for the gratuitously Halloweeny theme, "Bread and Circuses" for being little more than an excuse to have a gladiator fight, "Assignment: Earth" for using TOS as the pilot episode for a series I wouldn't have watched, and so forth), but the ones I am fond of more than make up for them.

The third season, unfortunately, is sort of an inverse of the second—there are episodes I like, but they're overshadowed by all the ones I don't, to the point where this is one of my least-favorite seasons of any Trek. The budget cuts and behind-the-scenes personnel changes are palpable: visually, these episodes tend to be darker and less interesting than the others; in terms of storytelling, there's a distinct lack of subtlety in the way many of the philosophical and moral questions are handled. Moreover, several episodes don't cover enough ground to justify the length ("The Empath", "That Which Survives", "Let That Be Your Last Battlefield") or veer off into bizarre territory ("Spock's Brain", "The Way to Eden", and the embarrassing "Plato's Stepchildren", which I rank among the worst of any Trek episodes). We don't even get any closure from the final episode ("Turnabout Intruder"), which rehashes themes we've seen before and, like many episodes this season, downplays the role of the heroes by allowing the conflict to drive itself.

That is not to say it's all bad, however. "Spectre of the Gun" is possibly my favorite Western-themed episode in all of Star Trek, and I appreciate the general trend that Chekov and his fellow supporting characters get more air time this season. "The Paradise Syndrome", "The Tholian Web", and "All Our Yesterdays" shake up the Big Three in ways we rarely get to see. "The Enterprise Incident" develops the Romulans more. A handful of other episodes are at least on par with anything from previous seasons. The overall drop in quality is disappointing, but the highlights are worthwhile.

TOS isn't close to my heart the way it is for other people, but I respect what the show accomplished for its time, and I'm grateful for the groundwork it laid for future films and series. Not to mention that, at its best, TOS is darn fine sci-fi.
STAR TREK SERIES OPINIONS HOME