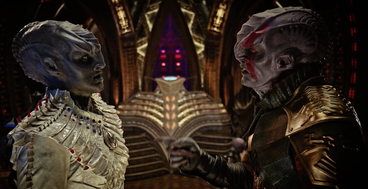 First and foremost: I can't suspend my disbelief enough to accept that this show fits canonically between ENT and TOS. To save time and effort, I'll refer you to Ex Astris Scientia for a deep dive on the show's continuity problems, particularly visual continuity. Star Trek has always had issues with inconsistencies, and I'm willing to forgive or explain away a great many of them, but Discovery goes well beyond honest mistakes and eyebrow-raising oversights. This show cherry-picks whatever elements of Star Trek it wants to preserve and unapologetically rejects or rewrites the rest. At least 2009 tried to blame time travel for its radical differences; Discovery didn't even hang a lantern on its discontinuities until fans started to complain. And you know there's a problem if I'm citing 2009 as a standard to live up to.

Despite this, I might've given the show more of a chance if, at its core, it felt like Star Trek. But Discovery feels nothing like any Star Trek I know. A cast full of characters who are antagonistic, self-centered jerks. Depressing situations pervading every episode, without nearly enough optimism, teamwork, wonder, or purpose to balance them out. Gratuitous blood and guts. Full-on nudity. Unfiltered swearing. Only the feeblest attempts at saying anything thought-provoking, philosophical, or socially relevant.

That last point was the deal-breaker. Although gritty realism is not something I enjoy in my escapist fiction, and although I can't stomach graphic violence, I would try to put up with those things if there were an intellectual and emotional payoff. Half of why I watch Star Trek is that it's intellectual conversation fuel, and I was disappointed beyond belief that Discovery dropped that ball so hard. After nine episodes, the only deep thoughts I had were regarding how a so-called Star Trek released in 2017 could be so oblivious to the real-world issues that should be informing its storylines.

The writing isn't just fluffy; it's incompetent. The characters are absolute morons who create conflict because the story calls for it, not because it makes any sense. Imagine how absurd it would be for Riker in Season 7 of TNG to knock out Picard at the first sign of a disagreement—that's basically what happens between Burnham and Georgiou. Landry, the chief of security, sees firsthand that the tardigrade is capable of incredible carnage and impervious to phaser fire; she dies like an idiot after pointlessly releasing the creature from its cage and trying to defend herself with a phaser. Harry Mudd, who is trying to sell secrets and technology to the Klingons, is released with barely a slap on the wrist after learning enough about the Discovery's secrets and technology to commandeer the ship and murder the crew several times over. And I'm sorry, but Saru's ability to "sense death" is just dumb, coming across as a dramatic gimmick more than a plausible evolutionary or telepathic means of detecting impending danger.

The writing also manages to screw up the one Trek-worthy part of this show: the fantastic diversity. Several strong female characters, multiple people of color, an LGBT couple, someone possibly on the autism spectrum...most of whom get killed off or grossly mistreated in the first half of the first season. One might argue that greater diversity means a greater chance of bad things happening to people who aren't straight white dudes, but I think the show could do better than incarcerating its only Black character at the end of the second episode.

I have no qualms with the casting, acting, or production values. The opening credits are fine, but I miss the luxurious flybys that establish the ship as an important part of the show. That's another thing I dislike: the show skimps on the establishing shots that have traditionally given me an attachment to the locations and ships. I'm tired of war stories, and I'm especially tired of revisiting Kirk's era just for the brand recognition. The only conceivable reason Discovery takes place when it does is so that the Enterprise can show up; change the Enterprise to any other ship, and the show would fit perfectly sometime after Nemesis, thus eliminating basically all the continuity problems in the process.

For a time, I kept up with episode summaries/reviews to see if I should give the show a second chance. At this point, I'm over it. I've got better things to do than force myself to watch a show that fundamentally isn't for me, regardless of whether I could ever consider it to be canon.