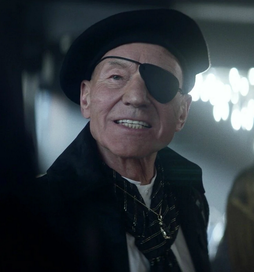 When Picard was first announced, I immediately hoped it would get canceled before airing. I had spent the last decade being angry, frustrated, and disgusted at what Star Trek had become, and I had no faith whatsoever that the keepers of the franchise would do anything other than ruin TNG, my favorite Trek series and indeed my favorite television show of all time. The Short Trek prequel "Children of Mars" sent up red flags that some of my fears were about to be confirmed.

It was with great anxiety that I watched the first episode, "Remembrance." By the end, I was in tears—not tears of grief, as I had expected, but tears of joy and relief. The episode wasn't perfect—there's plenty I would've changed—but it extended several olive branches to jaded fans such as myself, who needed to be reassured that this show would honor the past while looking to the future instead of just cashing in on nostalgia while launching continuity out the airlock. For the first time since the penultimate episode of ENT, I felt like I was watching genuine Trek—social commentary in the guise of sci-fi, without any mental gymnastics required to accept it as canon.

The second episode, "Maps and Legends," killed the momentum. "The End Is the Beginning" picked it back up again. With "Absolute Candor," the series finally felt like it was going somewhere. And then "Stardust City Rag" brought the show to a screeching halt.

Incredibly gratuitous gore. Callously discarding Icheb for a cheap emotional punch. Putting Seven on a new trajectory that doesn't seem to flow logically from where we left her at the end of VOY. Glossing over whatever history Seven and Picard have, and wasting the potential for a scene where these two ex-Borg sit down and discuss their experiences, which is 100% Trek-worthy and relevant to the series (the tiny exchange at the end barely counts). Pulling focus from Picard's story to go on some unsatisfying side quest that blows every opportunity to be a fun, Ocean's 11-esque adventure and instead serves as a platform for the actors, not the characters, to ham it up. Jurati's profoundly disappointing turn as a murderer, and Maddox's excruciatingly drawn-out death sequence. The episode left me sick to my stomach—the same way I felt after every episode of Discovery, which was a contributing factor to why I gave up on that show.

Whatever trust was earned by "Remembrance" was irreparably broken by "Stardust City Rag." And unlike the other episodes in my Star Trek Bottom Five, I can't just selectively ignore this one; it's absolutely pivotal to the story. "The Impossible Box" helped wash the taste out of my mouth, also wrapping up the interminable Soji/Narek romance storyline that was using so much screen time to accomplish so little. I went into "Nepenthe" with trepidation, expecting Riker and/or Troi to die stupidly for the sake of drama—and I was surprised and thrilled to discover the best episode of the series, demonstrating how good Star Trek can be when characters support each other and work through their problems together (plus, Kestra steals the show). I know it's characteristic of modern television, but it's exhausting to watch all the subterfuge and mistrust and unhealthy coping of the various characters in Picard.

"Broken Pieces" had its share of great scenes, but it's where I began to put a finger on one of my fundamental issues with Picard—namely, that the show takes almost an entire season to shallowly explore the kinds of thinky ideas that any other Trek would have covered in depth in an episode or two. Broken people putting themselves back together, the dangers of being led by fear, the meaning of sacrifice, etc—these are very Trek-worthy themes, but they aren't developed in a very Trek-worthy way.

From dystopian Starfleet to the xBs to the threat of a synthetic apocalypse from another dimension, almost anything with thought-provoking potential serves as a plot device first and social commentary second. Perhaps because of the serialized format, Picard loses sight of Star Trek's core identity as allegory first, sci-fi second. "Broken Pieces" in particular sabotages its own message; that dialogue about whether Vandermeer knew that Jana and Beautiful Flower were synthetic seems to undercut the notion that synthetic life is just as valid and worth cherishing as organic life.

"Et in Arcadia Ego" brought to light another of my fundamental issues with Picard—the pacing is completely wrong. I had gotten a sense of this as early as "Maps and Legends," but it wasn't until the crew reached the synth settlement that it clicked with me. There are so many questions to be answered, but the show rushes through Soji's reunion and this whole first contact scenario to get to the action-y bits. When it's all over, we have no idea what happened to Narek, it seems like the xBs have been forgotten and abandoned, and there's a vague hint that maybe Seven and Raffi are in a relationship...despite never (that I recall) having any dialogue with each other?

The more I think about it, the more Picard annoys and disappoints me. It's great to see Riker save the day, but is it really feasible that he's commanding Starfleet's flagship on such short notice? Why is there only one class of starship in that confrontation? (And don't you dare say "they ran out of budget"; I know for a fact that there are existing high-res CG models of older ships that absolutely would've still been in service.) Why does Picard never check in with the folks back at the vineyard, and what kind of dog person leaves behind his faithful companion so easily? Why is the show so forgetful about important-seeming details, like the badges the Artifact personnel wear that are supposed to light up when there's trouble? After the events of the first couple episodes, why does Picard continue to have such confidence that Starfleet will listen to him? At the very least, there must be other admirals he could contact who are on better terms with him. I'm only scratching the surface here. When it comes to Star Trek, I can usually forgive or explain away any apparent oversights or plot holes, but Picard really tests my limits.

Beyond all the questions, there are so many things I flat-out dislike. Star Trek has always been a positive vision of the future; dystopian Starfleet only works for me if the plot involves restoring its integrity, which is not the case here. I was super excited about the prospect of Dahj and Soji being Data's actual daughters, constructed or at least planned in secret, so I was incredibly bummed to learn that they were basically just unauthorized clones. As someone who didn't mind Data's sendoff in Nemesis (heresy, I know), I felt that "Remembrance" was a perfect way to shed any lingering bitterness and properly say goodbye to the character...which made Data's reappearance at the end of the season feel more like a gratuitous apology to angry fans than a necessary step in Picard's journey (seriously, he could've atoned for his embarrassment by being a better friend/father figure to Soji). I greatly appreciate the return of Hugh in a role that makes perfect sense for him, how the Borg have been re-framed as victims, and the struggles the xBs face in returning to society as individuals...but I disdain how easily all of that is discarded for the sake of cheap emotional drama when Narissa shows up. The rehabilitation program feels pointless when you look at how things end up with the xBs.

I'm not terribly fond of the new characters. It's painfully obvious the writers had no idea what to do with Elnor, who feels like he got lost on the way to the Lord of the Rings set and no one had the heart to ask him to leave. I liked Jurati until her murder attempt. Raffi would be fine if her self-destructive tendencies had been addressed like they would've been in any other Trek. I would've rather followed Dahj than Soji. Rios and his holographic counterparts make for a character I like better in concept than in execution. Narek is dull. Narissa is uncomfortably borderline incestuous and is the worst kind of villain—just there to be evil and kill people, and constantly able to get away at the last minute. And that's to say nothing of Admiral F-Bomb, Commodore Plot Advancement, or Antagonistically Inconsistent Soong.

Whereas the other characters have a distinct voice, Picard sounds like he's a mouthpiece for whomever the writer is on that particular episode. Picard's brain abnormality is a lazy storytelling device that could easily have been omitted, and it simply feels wrong that Q didn't show up in the final episode as a callback to "Tapestry." Beverly Crusher's absence is also highly suspect—between "Attached" and "All Good Things..." (and Nemesis, to a much lesser extent), the romantic relationship between Crusher and Picard is too big a plot point to let drop without at least hanging a lantern on it. Imagine if "Nepenthe" had featured either Riker or Troi, with no mention whatsoever of what had happened to the other character.

With the exception of the breathtaking Artifact and the updated vintage Bird-of-Prey, every one of the starship designs bores me, a feeling I have never experienced watching Star Trek. I could really do without the blood and swearing and drug use; they feel inauthentic to the Star Trek I know, which has always been more risqué than gritty, and otherwise pretty family-friendly. The trail of bodies the show leaves behind makes it difficult for me to enjoy myself; I'm always waiting for the other shoe to drop, which is the opposite of the "they'll probably survive, but how?" feeling I associate with Star Trek. I like Terminator and Mass Effect as much as the next guy, but I would've been happier without Star Trek joining the list of sci-fi universes threatened by a machine apocalypse. I miss seeing the episode name listed on screen after the intro credits; that's a little touch that makes a show feel that much more Star Trek.

Ultimately, Picard feels almost more like collaborative fanfiction than an official continuation of the franchise. So many story directions I'm unhappy with, so much wasted potential, so many unanswered questions, such uneven pacing, and none of the philosophical or intellectual satisfaction I expect from the franchise. They had ten episodes to tell one continuous and tightly themed story, but it feels like each episode is trying to figure out what the show is actually about. Picard isn't even the most important character in the story; after he leaves Earth, he's largely irrelevant until the very end.

I know every Trek takes a couple seasons to find its footing, but I don't intend to stick around for more. Just thinking about Picard makes me unhappy, and given the current direction of the franchise, I can only assume that a second season will only make me feel worse.